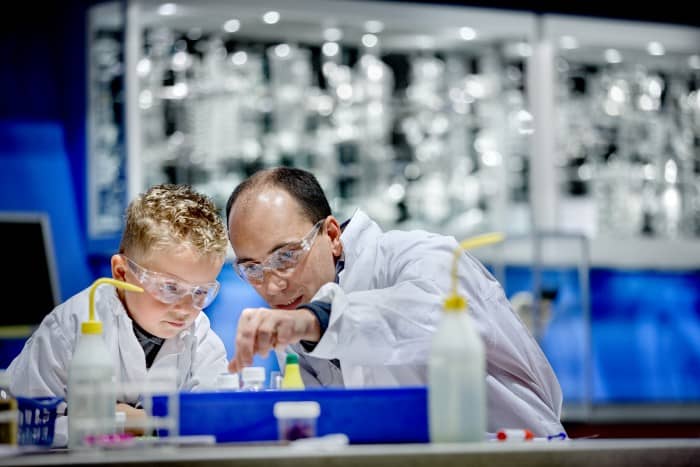 Geneva, Switzerland, 30 September 2015 – A failure to embrace long-term structural reforms that boost productivity and free up entrepreneurial talent is harming the global economy’s ability to improve living standards, solve persistently high unemployment and generate adequate resilience for future economic downturns, according to The Global Competitiveness Report 2015-2016, which is released today.

The report is an annual assessment of the factors driving productivity and prosperity in 140 countries. This year’s edition found a correlation between highly competitive countries and those that have either withstood the global economic crisis or made a swift recovery from it. The failure, particularly by emerging markets, to improve competitiveness since the recession suggests future shocks to the global economy could have deep and protracted consequences.

The report’s Global Competitiveness Index (GCI) also finds a close link between competitiveness and an economy’s ability to nurture, attract, leverage and support talent. The top-ranking countries all fare well in this regard. But in many countries, too few people have access to high-quality education and training, and labour markets are not flexible enough.

First place in the GCI rankings, for the seventh consecutive year, goes to Switzerland. Its strong performance in all 12 pillars of the index explains its remarkable resilience throughout the crisis and subsequent shocks. Singapore remains in 2nd place and the United States 3rd. Germany improves by one place to 4th and the Netherlands returns to the 5th place it held three years ago. Japan (6th) and Hong Kong SAR (7th) follow, both stable. Finland falls to 8th place – its lowest position ever – followed by Sweden (9th). The United Kingdom rounds up the top 10 of the most competitive economies in the world. 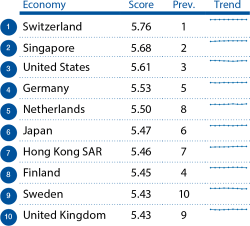 The Netherlands climbs three places to fifth, regaining its highest-ever position in the index on the back of small improvements across a wide range of indicators. Its strongest scores come in areas including education, infrastructure, institutions, business sophistication and innovation; its weaknesses include inflexibilities in the labour market and continuing doubts about its financial markets. Its score on financial market development is still significantly lower than in 2007, before the global financial crisis and the bursting of the Netherlands’ real estate bubble. 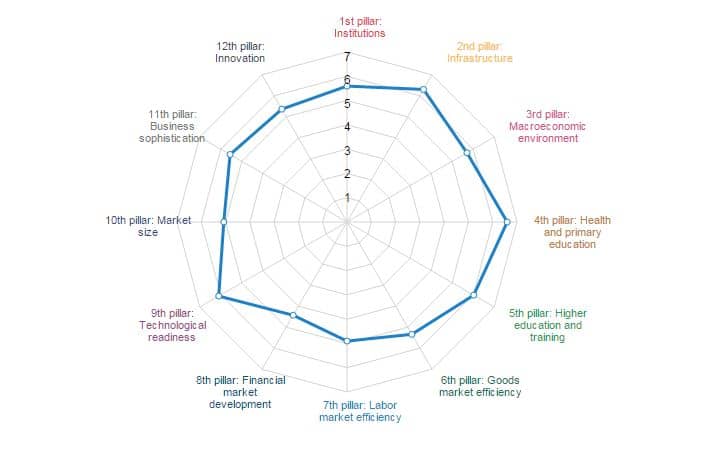 Read the full WEF report on the Netherlands here